IgA nephropathy is chronic kidney disease. It progresses for 10 to 20 years and can cause end-stage renal disease. It is caused by deposits of the immunoglobulin A (IgA) protein in the filters (glomeruli) in the kidney. These glomeruli normally filter waste and excess water from the blood and send them to the bladder in the form of urine. However, IgA protein avoids this filtering process.

This can generate the following factor:

It is the most common cause of inflammation in older adults. It is more common in Caucasian and Asian people. It is most often found in people in their teens at 30 years of age. The IgA protein is a normal part of the body’s immune system. It is not known what causes IgA deposits in the glomeruli. In more than 10% of affected families, it is hereditary. Some people who inherit the gene may not have any symptoms, but they can transmit it. Men are more affected than women.

IgA nephropathy is a silent disease that can go unnoticed for years. This can occur at any age, but more often the symptoms begin before the age of 40. The most common symptom is blood in the urine (hematuria). It takes many years to move on to the stage that causes problems. These include inflammation, recurrent infections of the upper respiratory tract or intestinal disease. People with IgA nephropathy may also have flank pain and low fever. Very rarely, blood pressure can be dangerously high.

IgA is a protein called an antibody that helps the body fight infections. IgA nephropathy occurs when too much of this protein is deposited in the kidneys. IgA accumulates inside the small blood vessels of the kidney. Structures in the kidney called glomeruli are inflamed and damaged.

The disorder may appear suddenly ( acute ) or worsen slowly over many years ( chronic glomerulonephritis ).

The risk factors include:

IgA nephropathy can occur in people of all ages, but it most often affects men from adolescence to the late 30s.

Symptoms may not appear for many years.

When symptoms occur, they may include: 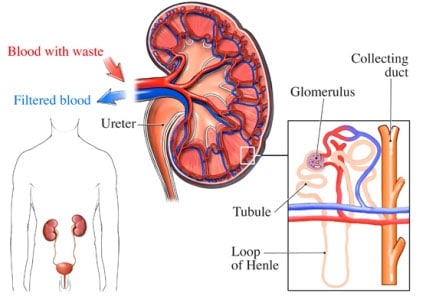 IgA nephropathy is often discovered when a person with no other symptoms of kidney problems has one or more episodes of bloody or dark urine. No specific changes are observed during the physical exam. Occasionally, blood pressure may be high or there may be swelling in the body.

The goal of treatment is to relieve symptoms and prevent or delay chronic renal failure.

Salt and fluid consumption may be restricted to control swelling. In some cases, a diet with low to moderate protein intake may be recommended by a nephrologist in Delhi. Finally, many people should receive treatment for chronic kidney disease and may need dialysis. Expectations (prognosis) IgA nephropathy slowly worsens. In many cases, it does not at all. Your disorder is more likely to get worse if you have: