It is more common in people who are already hospitalized, particularly those who need intensive care. In addition, it is usually secondary to complicated surgery, a generalized infection, after a serious injury or when blood flow to the kidneys is interrupted. Although it is usually reversible by acute renal failure treatment in Delhi, the severity is variable and may require renal replacement therapy for a period of time.

What are the symptoms?

It can be manifested by an alteration of the analysis, producing an increase in creatinine and urea levels, or by the appearance of certain symptoms such as a reduction in the volume of urine that can be accompanied by changes in appearance (dark urine, concentrated or with the presence of blood). That reduction in volume can lead to the absence of urine or anuria. Due to this decrease in the volume of the urine, if there is an uncontrolled entry of liquids, there is water retention that leads to the appearance of edema or even a cardiorespiratory overload that triggers.

Uremic syndrome: It is the main consequence of renal failure. There is an accumulation of uremic toxins that produce alterations in various systems. It is capable of causing gastritis with loss of appetite and disorders in the intestinal rhythm. Anemia is caused by a decrease in the formation of red blood cells, as well as an increase in losses, even by some ease for bleeding.

It causes a certain immunodeficiency that facilitates the appearance of infections. There are hormonal changes such as certain hypothyroidism. Among the most affected systems is the neurological one with the development of neuropathy and, above all, progressive metabolic encephalopathy with a deterioration of the cognitive capacity that leads to coma in severe cases.

Of course, the appearance of all these symptoms will depend on the baseline state of the patient, his age and nutritional status, as well as the presence of other organic failures.

What are the causes?

Acute renal failure can occur because some or all of the mechanisms involved in glomerular filtration fail. A decrease of the filtrate can occur when the filtration pressure decreases due to a reduction in blood pressure or significant hypovolemia (absolute due to hemorrhage or dehydration, or relative due to poor distribution of vascular euvolemia as occurs in septic conditions, ascites, intestinal occlusions ).

This acute renal failure can occur due to loss of functional units, such as in glomerulonephritis or by the action of toxic substances such as some medications (including intravenous contrast).

Other causes of acute renal failure are those that occur when an obstructive condition occurs that does not allow the removal of the filtrate, such as when there is a prostatic obstruction or ureteral compression by masses or ganglia.

There are several factors that can predispose to the appearance of this disease, such as advanced age, chronic infection, diabetes, high blood pressure, immune disorders, kidney and liver problems, prostatic hypertrophy and bladder obstruction. The signs and symptoms that these patients present and explained by a nephrologist in Delhi are: 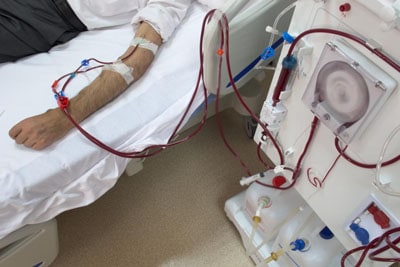 Because acute renal failure is usually a complication of other serious diseases, sometimes the signs and symptoms may go unnoticed or be attributed to the underlying disease. When this disease is suspected, a blood and urine test should be performed. The alterations that may appear are: decrease in the volume of urine (less than 500 milliliters), an increase in the blood of urea and creatinine and elevated electrolytes such as potassium. It is usually necessary to perform an abdominal ultrasound and, sometimes, even a renal biopsy to determine the cause of acute renal failure. The earlier it is resolved, the more likely it is to recover renal function. Occasionally, acute renal
failure causes permanent loss of renal function and people require permanent dialysis or a kidney transplant in Delhi to survive.

Acute renal failure treatment in Delhi begins by correcting the cause that has caused renal failure. This can be clearly observed when there is dehydration or hypotension, replenishing volume, or when there is an obstruction, in this case, the use of a probe or nephrostomy is the solution suggested by a nephrologist in Delhi.

When there has been an important involvement of the kidneys, and there has been no recovery after stabilizing the patient, it is necessary to keep a watch on the vital signs, control the balances to avoid an overload, the use of medications that must be adjusted regarding the dose or its suppression if they can influence negatively In certain cases, resorting to diuretics if it is necessary to increase the rate of diuresis or in some cases start by replacing renal function by using dialysis techniques.